When I was a kid, summer heat was not as severe as today. It used to be 30 Celsius, or just a little above of it. But because of global warming, it often becomes 35 Celsius or higher in the height of the summer season in recent years. Today, too, the weather forecast is saying the temperature in my place will reach 35 Celsius. Heat is severe and sunlight looks harmful.

I remember it was the end of May when I got a message from the university which was saying that I had to teach Japanese literature reading class in the coming fall semester. Since I had heard of it, I had read a lot of books about Japanese literature. Because I wanted to teach the best of the Japanese literature that has 1300 years of history. Perhaps a foreign people may say that 1300 years are short, saying that other world major civilizations have longer histories also for literature. Yes, in ancient times, Japanese didn’t have letters/characters to write down and record our own language. But once Japanese learned how to write Japanese sentences, a lot of literary works were made and handed down to the late generations.

I designed how to teach and schedules of my Japanese literature class so that I could teach the whole history with the best articles. One of those articles that I really wanted to introduce was “Sarashina Diary” by a daughter of Sugawara-no- Takasue. It is not a lengthy book but a short and concise one. The diary is a memoir of a lady’s life in 11th century. It lively describes fun things and sad things that happened to her from when she was a girl to when she lost her husband in her later life. The interesting thing is that although it was written in almost one thousand years ago, there are a lot of things that can be shared with us living in modern times. I expect that many of my female students would like it.

In order to get a whole picture (though it’s literature), I borrowed a lot of books from the city library. I searched books on the city library’s website, reserved some books, and went to the library to get them. I also bought a scanner to take copies of books to make a textbook by myself. But last week, I got a message from a student (not from the university), saying that the class would not be held in the coming semester because very few students wanted to take it. I think what she said is right, although the chief of the Japanese department said to me he was not 100% sure. By that time I had already spent a lot of time to prepare for the class, but that was not enough. I still had to prepare for the level of teaching in the real situation. If the class would not be held, it would make my work easier. So basically I have to be happy for cancellation of my Japanese literature reading class.

As of today’s morning, I was borrowing 9 books from the library. Some were interesting even if I wouldn’t use them for the class, but I decided returning them to the library. Today “Heat Stroke Alart” is being issued to my area by the Ministry of Environment of Japan. So going outside is not good. To avoid the hottest hours, I decided to go there before noon with a parasol. A lady often uses a parasol under the sun, but it is rare for a man to do so. Yes, this was the first time for me to go outside with parasol.

I have a garden (a vegetable field? I don’t know how to call it) and grow many kinds of vegetables. I have to work at least one hour on the ground every day. These days I do it after breakfast; it is from 7:30 to 8:30 a.m. Although it is just an hour in the morning, I have got sunburn on my left elbow because of strong sunlight. Skin got red. So I wouldn’t like to expose my left elbow to sunlight. A long sleeve shirt cannot be a solution because of the temperature. I decided using a parasol of my mom.

Getting out of my house to go to the library and opening the parasol, I realized that one connection between the cloth and the tip of a beam was broken. But the biggest problem was that it is too SMALL to me. Yes I borrowed my mom’s parasol. It would be big enough for her, but not for me. If I stretched my elbow down, my sunburned elbow would get sunlight. So I should be folding my left hand with my right hand holding the parasol. It should have looked weird; A guy in 50 was walking holding a small parasol with both hands. Anyway, I went to the library and returned nine books two days before a deadline. Now I am typing this in a cool, air-conditioned room. 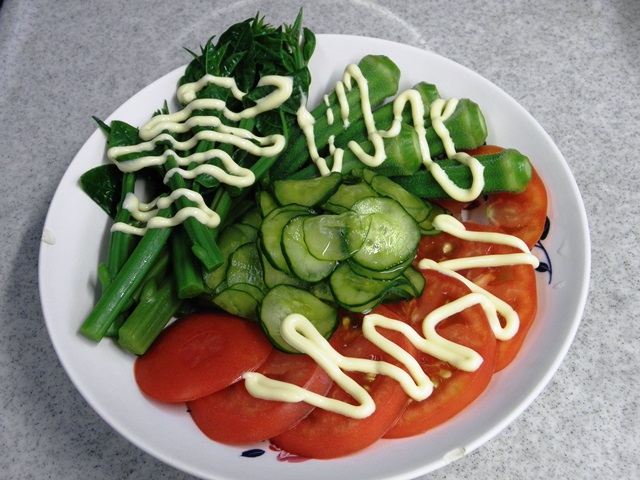 These are vegetables that I grew. 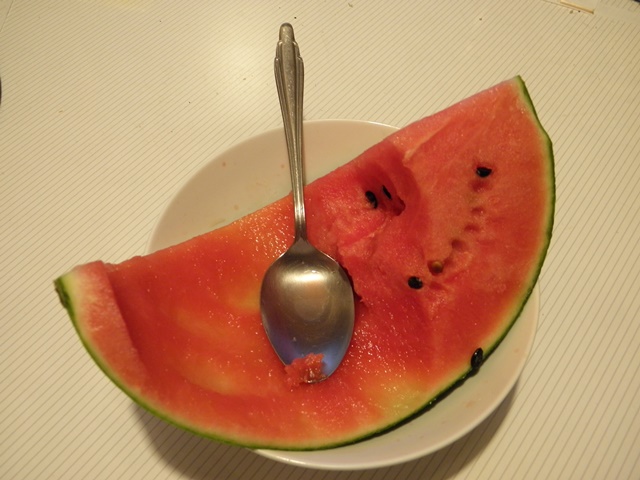 But I cannot grow watermelon. It is too difficult for a beginner like me. This watermelon was bought in a supermarket. A little past the best timing.