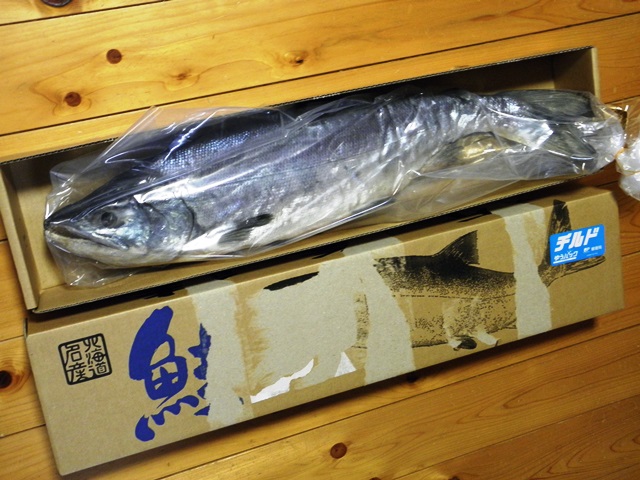 So this is the end of the year 2020. Every year at this time a lady in Hokkaido sends us a one whole salmon as a year-end gift. That lady’s husband and my dad had worked together forty some years ago. Her husband died young, but she continues to send the year-end gifts to her husband’s old colleagues. Actually my dad had long been ill and was unable to deal with salmon by himself. But I couldn’t say her to stop sending. Because I thought that sending year-end gifts to her husband’s co-workers makes her feel the connection to her dead husband.

But this year, a change had happened on our family side. My dad died in February. We should have told her soon, but we haven’t done that yet. This morning, my mom wrote a letter, although she hasn’t brought it to post office yet. Anyway, I had to cut and slice the salmon. I have done that yesterday.
The first thing I have to do was to sharpen a knife. I honed a thick blade knife with a whetstone. By the way, I want you to know that Japanese do not rubbing two knives together with clicking-clacking sounds when we sharpen a knife. We do that one by one with whetstone as in the photograph.

He is bigger than the cutting board. I use the word “He” because I guess the salmon is male. The reason is simple; his nose is sharp. A female salmons have round nose. Anyway I have to cut the salmon neatly, but I think that, for this kind of techniques, how many times one has done it before matters to do it well. I mean if I had cut salmons one hundred times, I could do it well. But this was just the third times for me to cut and slice a one whole salmon. So please do not expect much.

At first I cut the head and fins. Of course they can be eaten. There is no part that can be wasted as to salmon. 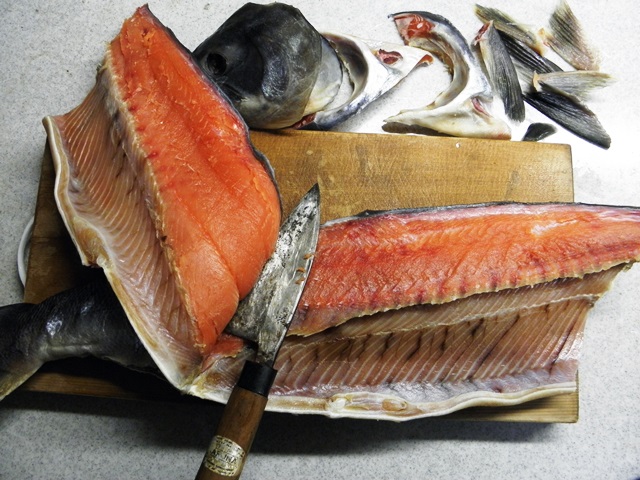 OK, this is the most difficult part of the process. You need to cut a half body on one side. At the center of the body, there is a line of bones from the backbone to the top. It is important to cut as close as you can to those vertical bones at the center. But I should admit that I am not good at it. You can see that meat remains on bone side thick. 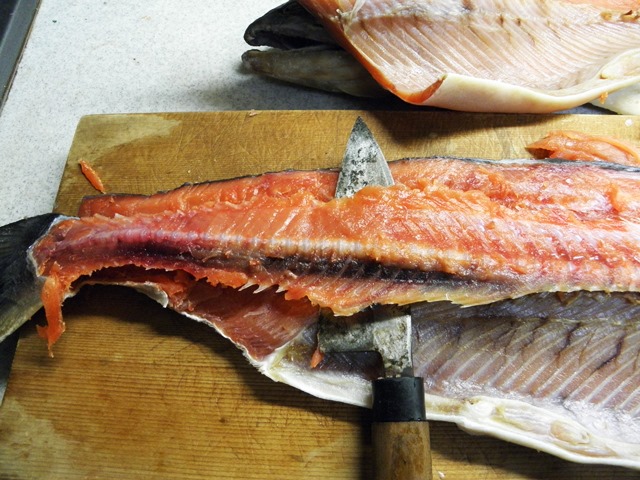 The next process is to cut the backbone out from the other side of body. 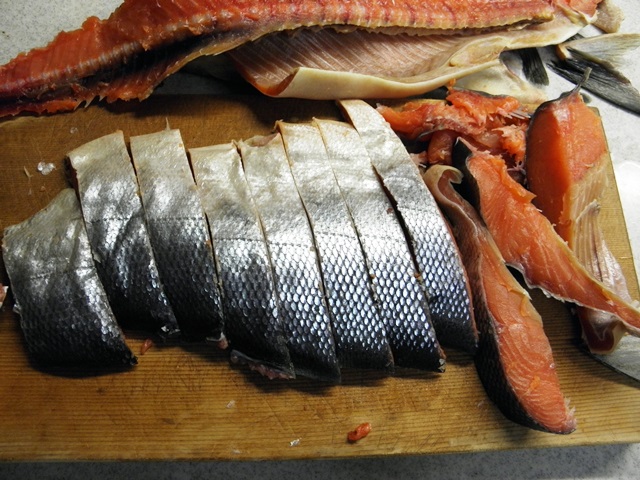 And then I slice the half body so that they can be easily grilled.

Then I wrapped each slice with cling film. Anyway I have almost done the work.

A good thing about salmon is that you can eat even the head, bones, and fins by boiling them for several hours. Those parts will eventually become soft and edible. If you have a pressure cooker, boiling hours can be shortened to the less than an hour. Since I don’t have a pressure cooker, I just boil every time I stand in the kitchen. And then the head and bone can be soft in two days.

The slices of salmon were a lot. So I just put them in the freezer. But they were still a lot. So my mom wanted to give part of them to her friend. This morning my mom went out to the lady’s house to give her some slices of the salmon. The lady is taking a care of her mother alone in her house. I have to tell ya that her mother is one hundred and six years old. I hope that the salmon that I sliced will be on the table of the centenarian as part of New Year celebration.